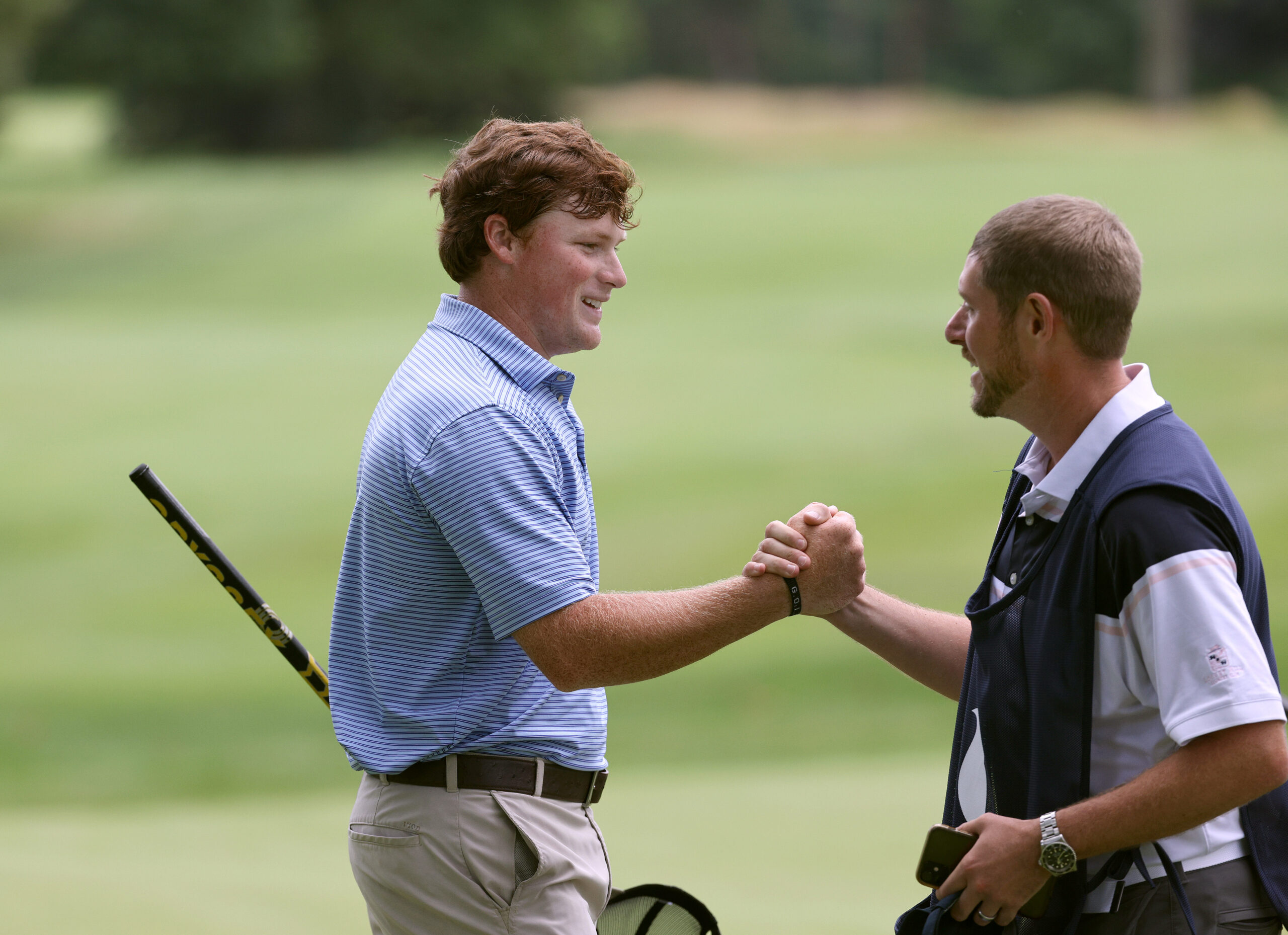 C.J. Easley gets a congratulatory handshake on the 18th green following his win.

PITTSFORD, NY (July 10, 2021) – Auburn junior C.J. Easley birdied his first two holes on Saturday and never looked back, winning the 80th installment of the Monroe Invitational at 12-under par (268), five shots clear of second place finisher Nicolas Cassidy (-7) of the University of Georgia. Easley, who held a three shot lead going into Saturday, finished the tournament with rounds of 69, 66, 67, and 66 on the par-70 course. Ross Steelman (Georgia Tech), Andre Lautee (Team Australia), and Nathan Ng (Stanford) all finished in a tie for third place, finishing the tournament at -6. Just three years after finishing +12 and tied for 31st in his other appearance at the Monroe Invitational as a high schooler, Easley flipped the script with -12 in 2021 to be crowned the champion. The Oxford, Mississippi natives familiarity and patience throughout the week allowed him to be the only player in the tournament to shoot all four rounds under par. Easley was a cool character all day and was never really threatened by the rest of the field. “I knew I had a few shots in hand and I just wanted to keep the pedal down like my dad has always said, and I did,” said Easley. He went out in 32 (-4), his best front 9 of the tournament, and held a five shot lead at the turn. With the cushioned lead on the back, Easley birdied holes 10 and 12 and finished the round with five-straight pars. Following an approach shot out of the right rough on the par-4 18th which landed just off the green, Easley made the trek up the fairway with a crowd of fans following behind. A beautiful chip to within a foot allowed Easley to tap-in a routine putt to secure the prestigious win. After signing his scoreboard, Easley made an important phone call to his mother to deliver the good news. “She was pretty proud of me,” he said. “It was a pretty cool moment. I just wish they were here (both parents),” he said with some heartfelt emotion. Easley is the son of Jamie and Kerry. Easley joins Monroe member John Kircher, one of the area best-ever local players, as the second Auburn golfer to take home the tournament title. Jason Duffner, the 2013 PGA Champion at Oak Hill Country Club, is also an Auburn graduate and former player at the Monroe Invite. Easley felt some of that Auburn pride throughout the tournament. “I play with Domenic Bozzelli (an Auburn graduate) and Duff (Jason Duffner) a good bit so it was pretty cool to come up to Rocheter and hear some “War Eagle” chants and see some Auburn fans so far from home.” Bozzell is a current PGA tournament and graduate of McQuaid Jesuit. Third place finisher Ross Steelman was able to claw his way back into contention after a first round of 77, going 47 straight holes without carding a bogey. Louis Dobbelaar (Team Australia), the 13th ranked amateur in the world according to scratchplayers.org, finished tied for 7th at 4-under par. What’s next for the star? “I’m planning to play in the US Amateur and hopefully turn professional, whether it’s over here (in the US), or back home (in Australia), I’m not too sure yet, but turning pro is the plan,” Dobbelaar said following the round. Anthony Delisanti (Valparaiso) carded his best round of the tournament with a 3-under 67 to earn solo 6th place. Dobbelaar was joined by John Dubois (Florida) and Connor Howe (Georgia Tech) in a tie for seventh place. In all, 24 players finished even par or better for the tournament.